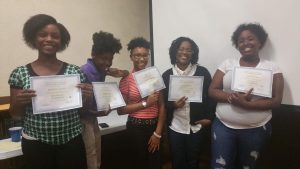 on 9.26.16 Adult leaders in the Grier Heights Community  developed leadership development programs for both boys and girls. The top priority is of course the leadership development program focused on the girls within the community called “Joyful Noise”. Joyful Noise is a the leadership development program for the girls within the community who are in 7th-12th grade, who the adult leaders feel have a tremendous gift of transforming not only themselves but their families, communities, schools, and eventually the world! In the past 2 years we have only had 1 girl, Adesia Martin, this year I am extremely proud to say that we had 5 girls from Grier Park Apartments to complete and graduate from the program. Those 5 girls are: Adesia Martin(12th grade), Raven McKoy(10th grade), Aniesa Fourney (8th grade), Makiyah Gaiten (8th grade), and Beyejah Krider (7th grade). As their adult leader throughout the program. The fabulous five stepped up and challenged themselves and each other to complete each tasked given. From leadership training, service projects, planning events, and volunteering these girls have gone above and beyond!

We had other adult leaders and other female student leaders(collectively there are 15 girls in our leadership development program) from the community, participated in our annual retreat. During the retreat we reflect on personal and group growth in preparation for the upcoming year.The retreat included small group lessons, personal reflection time,one on one time with designated group leader,crafts (we created floating lanterns),  and fun! For some of my girls this was their first time to experience nature, camp fires, canoeing, and just being able to say they had the opportunity to swim in a lake, which is so meaningful! I have also included pictures from graduation which took place in August.

Alexandria, Va., Aug. 29, 2016 ― The National Affordable Housing Management Association (NAHMA)’s Educational Foundation has selected 79 student/residents to receive scholarships this year. “The NAHMA foundation was very pleased with the strong application response that was received in 2016 and the outstanding overall quality of the applications we received. Our ability to fund these awards is a direct result of the generous and continuing support of our many donors. The foundation is truly grateful to each and every donor for their support,” NAHMA foundation chairperson, Melissa Fish-Crane, said at the foundation dinner June 15. Each individual scholarship is worth $2,500 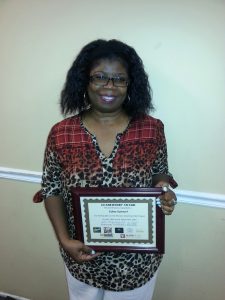 September 10,2016 Edna received award from the Women’s Empowerment of SC Mentor Match Up program. The event is sponsored by Cynthia Hardy from On Point on WACH FOX 57 television show. Her program match up community leader with a mentors.

A Charlotte apartment complex is partnering with CMPD, giving kids a safe haven to learn and grow while also building a bond with the officers who serve and protect them

For the 4th year in a row, Westminster Company has recipients of the NAHMA education foundation scholarship. This year 130 students in total were recipients. Each scholarship is worth $2500. 2017 was a record breaking year for this program. 51 more scholarships were awarded than the previous year for a total of $325,000. We all participate at the SAHMA state meetings to raise money for this foundation, so thanks to all who participate. This foundation is only possible through these generous donations. Let’s congratulate our two winners, Kaleshia Ford, Royal Lane Apartments and Justin Jones, Bailey Lane Apartments and commend them for their outstanding academic performance.